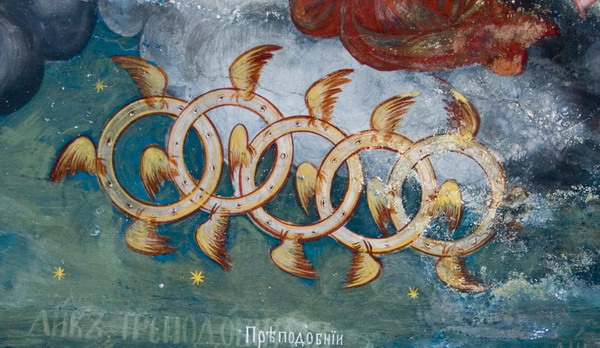 The basis for this series of posts is my discovery of the existence of the Pagan Blog Project – a website dedicated to providing bloggers with prompts, or generated ideas, for interesting topics about which to write.  Now, officially, there seems to be no “rule” barring a Theistic Satanist from contributing to the project, for the time being I am choosing to blog separate from the official Project as not to ruffle any feathers.

With that disclaimer out of the way, I will address the basic gist of this series.  Each week, a new topic will be chosen based on the letters of the alphabet – with two topics chosen for each letter.  That means that for the letter “A”, I will be creating two posts over two weeks and so on for the remainder of the alphabet.

My first topic for this project is “Angels”.

Why choose Angels?  I decided to write about Angels for two reasons.  The first reason is that Angels are often a recurring theme amidst many Occult and Neo-Pagan sources and are popular with the practitioners of related traditions.  The second reason is that Angels are seen as entities which completely contrast and often negate the entities and ideas which resonate with Theistic Satanists and Demonolators.  I will expand upon some of my thoughts regarding Angels in a Q & A format.

Q:  How do you envision Angels?

A:  I envision Angels as non-corporeal energetic beings with the ability to assume many different forms, depending upon the circumstances.  Most people imagine Angels rather simply – as merely beautiful human beings with wings and flowing garments.  Angels, at least primarily within Judaic traditions, are far more terrifying and inhuman than commonly depicted by Christians and Neo-Pagans.  I believe that Angels are, in their most primitive “forms”, quite strange to behold.  Take, for example, Ezekiel’s vision of the Chariot of God and the many strange and almost horrific Angelic beings he beheld.  Biblical and extra-Biblical depictions of Angels tell us that they are naturally quite bizarre and terrifying.

We find Angels depicted as creatures that breathe corrosive flames, completely inhuman “wheels”, columns of fire with innumerable eyes and wings, serpents of fire, beings with ever-changing faces and monsters of gargantuan proportions chained together as to be prevented from destroying the Universe.  My own sole encounter with an Angel was disturbing and left me feeling completely shaken to the core of my being – I encountered an entity as tall as a skyscraper which bellowed with an inhuman drone, its entire “head” consumed with fire. So, for myself, when I envision an Angel, I envision an alien and surreal entity with a cold and fixed Nature – a far cry from the kind and concerned beings depicted within Neo-Paganism.

That being said, I do believe that it is possible to encounter the “popular” manifestation of an Angel as a winged humanoid entity.   Like Demons, I believe that Angels possess the ability to change their appearance at will.

Q:  What do you believe that Angels are and what are their motivations?

A:  There really is no one answer to this question as I believe that each Angelic encounter must be examined within the context of the situation, the individual encountering the Angel and the origins of the entity in question.  Do I believe that Neo-Pagans are regularly encountering Judeo-Christian Archangels when they claim to be “guided by the Archangel Michael” or “blessed by the Archangel Raphael”?  To be quite frank, in most cases I do not.  That is not to say that I believe that no Neo-Pagan (etc.) has ever encountered a genuine Archangel – but it is my belief that the “entities” which they claim as guides and protectors are either merely Spirit Guides assuming the guise of an Angel or are manifestations of an internal process.

I look to the mythology of the Judeo-Christian Angels when I emphasise the argument that these Angels are not regularly interacting with every Neo-Pagan and psychic who petitions them.  When one is claiming that the Archangel Gabriel, for instance, is acting as a guide for them – I would immediately find myself the skeptic.  Archangels, like all of the named Judeo-Christian Angels, do not typically act independently of God.  That is the simplest and most basic truth when we look at their origins.  If one is claiming to be guided by the Angels, then one must assume that it is God, not the Angels, who is guiding them.

Those who would argue as to whether or not an Angel could act independently of God are focusing on the question of an Angel’s potential Free Will and not on the question of would an Angel act independently of God.  The answer is an overwhelming not likely.  Angels would be well aware of the consequences of disobeying the Will of God.  Would they risk being cast down from God’s sight if one adheres to the legends of the Fall of Lucifer?  I would sincerely doubt it.  Thus postulating that an Angel has Free Will and must then have the capacity to guide and protect human beings out of the goodness of its heart becomes irrelevant as it is the consequences of the choice itself, not the ability to choose, which renders it an unlikely event that an Angel would bestow its teachings and guidance upon a human being without God’s knowledge or command.

I do believe that it is possible that many Ceremonialists are genuinely working with Angels as intermediaries between themselves and God as many Ceremonialists are themselves either Kabbalists or inclined towards Christian mysticism.  However, Neo-Pagans, who actively shun and reject YHWH, would not be expected to have either his care or attention and thus the attention of his Angels.  I do believe that there are Neo-Pagans who cling to YHWH, either actively or passively, and thus may experience bona fide Angelic encounters, but I believe that they are few and far between.

Q:  If not “real” Angels, then what are so many Neo-Pagans experiencing when they claim to have been visited by these beings?

A:  As I have already mentioned, Spirit Guides are likely candidates.  One must remember that many Neo-Pagans come from a Christian household or have otherwise been immersed within a Christian society.  Angels, for most children, are nearly always a source of wonder and comfort.  Many of us are taught from an early age that our “guardian Angel” is watching over us or that our beloved deceased grandparents are now “Angels in Heaven”.  It makes sense that a spirit wishing to establish a line of communication with a human being, already familiar with the benevolent form of an “Angel”, would choose such a guise in order to appear kind, approachable and void of malicious intentions.

The second most likely explanation as to why so many Neo-Pagans believe that they are “working with” or are being “visited by” Angels, as I have mentioned, is that what they are experiencing is the manifestation of an internal process.  Many Neo-Pagans claim to experience Angelic encounters during states of mediation.  While the objective truth remains elusive, it is widely believed by Occultists that these “meditative states” do not achieve contact with an external spiritual realm, but rather they achieve contact with the internal subconscious states of unawakefulness.  I believe that “Angels” encountered during states of meditative consciousness may primarily be subconscious visions which draw upon, again, the familiar and comforting image of Angels as protectors.  This is not to say that such experiences are devoid of value altogether, but as with any meditative experience it is more likely to be the result of establishing contact with what is often regarded as the Higher Self as opposed to establishing contact with any external Angelic realm(s).

Again, I must reiterate that by no means am I implying that there are no legitimate Neo-Pagan Angelic encounters.  I am stating that I do not believe that such encounters are as common as they appear to be.

Q:  How significant are Angels to a Theistic Satanist or Demonolator?

A:  They are not significant at all within my personal practices.  I view Angels as agents of the Christian God and they have no place nor function within my magick and my rituals.

Q:  Do Angels really have the ability to constrain Demons as is claimed by Grimoiric traditions?

A:  In my beliefs they do not.  I do not believe that YHWH is omnipotent and therefore I do not believe that, through his direction, Angels somehow have to the power or authority to a) travel to the realm of the Demonic on a whim and b) bind and constrain Demonic entities neither in Their realm nor within any other.  The idea that Angels hold power over Demons is born of the dichotomous beliefs of Judeo-Christian authors responsible for the groundwork of Ceremonial Magic as we know it today.

Jewish traditions gave rise to the belief in the Shemhamphorasch or the 72-letter name of God.  From this name of God there was derived the names of 72 Angels and opposing these 72 Angels were their 72 Demonic “counterparts”.  We know these 72 Demons commonly and collectively as the Goetia.  According to Ceremonial Magic, the Goetia may be bound and manipulated through the use of the names of their corresponding Angels.  This tradition of Demons being controllable via a particular Angel is not peculiar to the Shemhamphorasch, but is found throughout a variety of Grimoires and religious mythologies.  Regardless, it is a myth which holds little water in regards to my own beliefs and experiences.

If so many different sources claim that Angels innately hold sway over Demons, why do I reject that this is the case?  I return to my original belief in the non-omnipotence of YHWH.  I will not even attempt to touch upon the origins of YHWH himself as it is beyond the scope of this post.  However, I will state that the mythological evidence for the non-omnipotence of YHWH establishes doubt that he is the creator of the Universe.  This evidence, for myself personally, subsequently negates his ability to indiscriminately constrain other Divine Beings (such as Demons) without consequence.  YHWH is no more capable of throttling Thor than Isis is capable of throttling Enki.  Perhaps such Divine clashes do take place, but if we examine mythology we discover that such acts of deific punch-throwing are often declarations of war.  Gods typically respect the domains of one another and certainly do not habitually bind, insult and flippantly “bitch slap” one another.

In other words, if God himself has not the authority nor capacity to constrain another Divine Being then there is little doubt that his Angelic agents would also lack this ability.

A:  Yes and no.  Some Demons are Fallen Angels, but not all Demons are.  These are my beliefs.

A Fallen Angel, in my beliefs, is an Angelic Being that has either chosen to “fall” or which has been “cast down” from its home realm by YHWH.  I do not believe that Angels are necessarily controlled by YHWH as one would operate a remote-controlled toy, for example – but rather, I believe that Angels have Free Will and thus choose to obey him.  By far, there is little doubt that the overwhelming majority of Angels choose to serve God without question – but mythology tells us that occasionally an Angel chooses another path.

I must establish that I do accept some of Judeo-Christian mythology as truth.  The fact that I accept some and not all is the reason that I consider myself a heretic and not a Jew or a Christian.  That being said, I also accept the existence and validity of entities and stories originating from other world mythologies.  My sometimes complex worldview is the reason why my beliefs regarding Angels and Demons is quite atypical of Neo-Pagans, Judeo-Christians and even most Theistic Satanists.